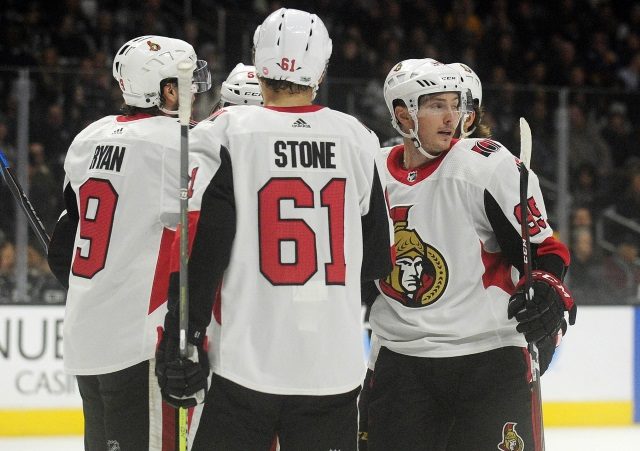 Contract talks between the Senators and Duchene progressing

Pierre LeBrun: Matt Duchene’s agent Pat Brisson has had two face-to-face meetings with Ottawa Senators GM Pierre Dorion since the start of the season. They most recently met last Monday in Toronto.

Bob McKenzie: It’s too early to say that a Duchene-Senators contract will get done as there is lots to do, but it does sound like contract talks are progressing. Both sides appear to want to get a deal done. guesses that they could do an eight-year deal at somewhere between $8 and $9 million.

Bob McKenzie: “As if often the case, beyond the basics of term and AAV, the devil can often be found in the details. Contract structure, signing bonus vs. salary, no-trade and/or no-move protection…those are amongst the things that can cause any negotiation to go sideways.”

No talks yet for the Senators and Stone

Bob McKenzie: The Ottawa Senators other pending free agent Mark Stone is not eligible to sign an extension until after January 1st. There is not much point for the sides to start negotiating now. There is the belief that for the right deal Stone would consider remaining with the Senators.

Bob McKenzie: Would expect that talks between the Senators and Stone’s camp would get underway early in the new year if not before that.

It seems like the Senators plan is to get both Duchene and Stone signed long-term.

Canadiens will have a logjam on the blueline

TSN: With Montreal Canadiens defenseman Shea Weber getting closer to returning to the lineup – possibly a week to 10 days away – the may have to move out a defenseman.

Pierre LeBrun notes on Insider Trading that the Canadiens will then have nine defensemen on their roster and teams are watching.

“The guy teams are looking at – Jordie Benn, who probably was available before the season, he didn’t move, but has played well, has played some big minutes. Now we’ll see what the Canadiens do. It’s one thing to say that they’ll be nine deep, but they have to get there. It seems like they lose a body every time they get one back. “

Montreal Canadiens Down On The Farm: Rookies on the leaderboard
What the Puck: Canadiens GM’s summer gambles pay surprising dividends