‘I am another man’: After 3 years outside, homeless Moncton man moves indoors

After living on the streets of Moncton in a tent for the past three years, the first thing Donald Morel did when he moved into a special care home in November was sleep for a week straight.

“I was so down… they wake me up for breakfast, I was coming back in my room and I was sleeping,” the 50-year-old said.

Glancing over at his new bed, with a Montreal Canadiens blanket on top, Morel said it is a vast improvement over sleeping on the ground.

“I said, ‘Wow, that is incredible. I don’t want to wake up anymore, I want to stay in that bed.’ And that’s why I sleep for one week and I really need it.”

Transition from street not easy 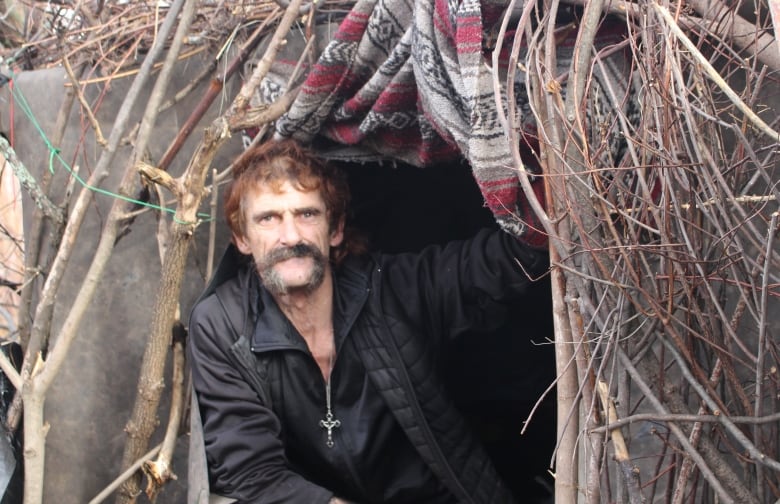 Donald Morel lived in tents, like this one, for the past three years in Moncton. Even though it was small, he always “made room” so his friends could come in to warm up. (Vanessa Blanch/CBC)

Morel, who was featured in a series by CBC New Brunswick on homelessness in November, said it was just a few days later that he found out he had a spot in a Dieppe special care home.

He had been living behind a boarded up rooming house downtown, in a tiny tent he built from a rubber tarp, house wrap and wood he scavenged around the city.

Morel kept warm with an old propane barbecue burner. He said even though the tent was small, he always welcomed others who were also homeless to come in and warm up.

Morel used to work as a roofer, but lost his job about five years ago after he had a heart attack. He said it’s been nearly impossible to survive on social assistance.

‘I’m getting too old to live in a tent’

Three years ago, Morel did move into an apartment briefly, but he was evicted after allowing others to stay with him.

He said as much as he likes to help others, this time he is thinking of himself.

“The people was coming to my place and they ruined my place. And this place — I don’t want to bring nobody here. I’m too sick and I’m getting too old to live in a tent and I’m getting a bit tired after three years.” 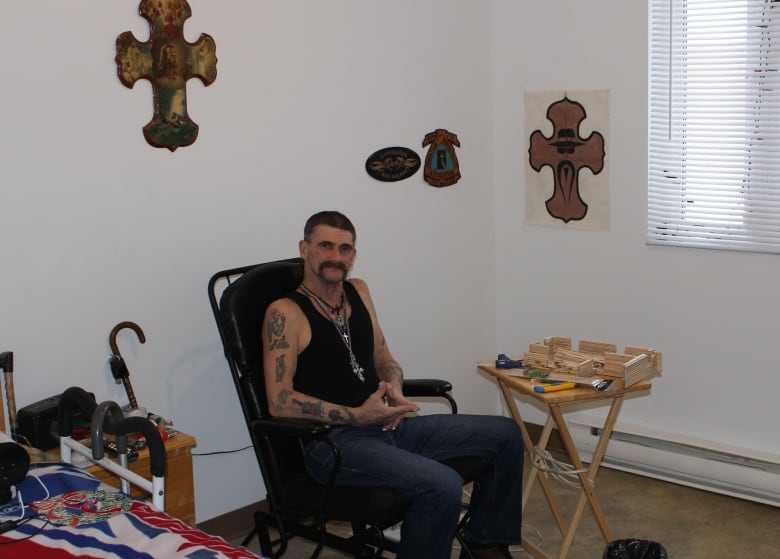 A comfortable bed is Donald Morel’s favourite thing in his new room at a special care home in Dieppe. He moved in last month after living outside in Moncton for the past three years. (Vanessa Blanch/CBC)

While he is happy in his new home, Morel said going from a life on the street, where you are just trying to survive, to a life inside, where you receive three meals each day, has been an adjustment.

For one thing, he found his room too warm at first and turned the heat off.

“The first time I came here I have a hard time,” Morel said. “In my room it’s really cold and the people say, ‘How come it’s so cold in here?’ I’m used to the cold.”

Morel, who suffers from bone cancer, said now that he receives his medication every day he is feeling “stronger and stronger.”

“I am another man. I try to be normal and have a good life — the little bit of life I got.”

I hate people judging people… if they are like that it’s not because they really want it. It’s because they have no choice.– Donald Morel

He said the other big difference in how he feels comes from being able to take  a shower every day.

“When you are living in the streets you’re always dirty,” he said. “People look at you [and say], ‘Look at that guy. He’s always dirty. He smells like shit. Go take a shower.'”

Now, Morel said, he feels good about himself.

Morel said a neighbour at his new home even gave him a suit that fit him perfectly. He recently put it on and visited his friend, Charles Burrell, the founder of the non-profit group, the Humanity Project.

“And Charlie just turned around and he said, ‘Oh my God, you look good in that suit. You’re not the same person.”

Morel said he’s trying to get used to the amount of free time he has. He often takes the bus to Moncton where he volunteers at the Humanity Project.

He also likes to make crafts and draw. He’s building a small house out of Popsicle sticks and wooden dowels.

“I told the people a joke,” he said of his wooden house. “I got a small mouse. He’s homeless so I’m building a house for the mouse.” 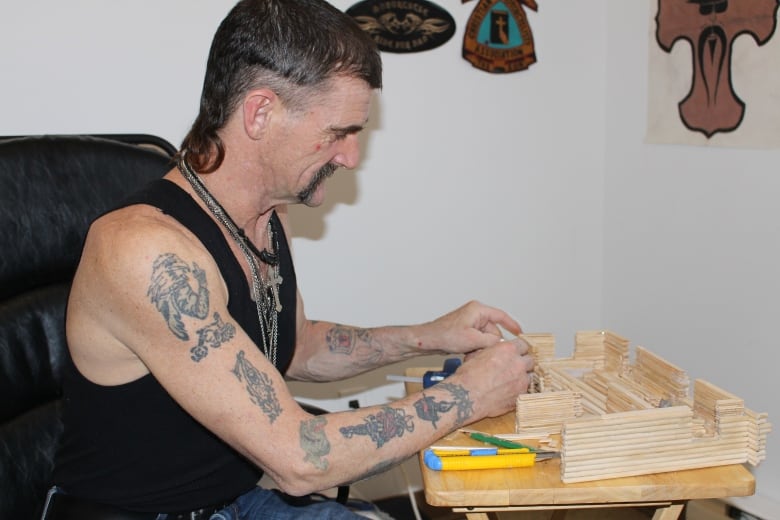 Donald Morel is building a house from Popsicle sticks and wooden dowels. He jokes it is for his pet mouse, who is homeless. (Vanessa Blanch/CBC)

Morel said his holiday wish is that people will stop looking down at others who are struggling.

“I hate people judging people… If they are like that, it’s not because they really want it. It’s because they have no choice.”